Ni Hadi Xa (NHX) is an agreement between six (6) Indigenous Nations (Deninu Kue First Nation, Lutsel K’e Dene First Nation, North Slave Métis Alliance, Northwest Territory Métis Nation, Tłı̨chǫ Government, and Yellowknives Dene First Nation) and De Beers Canada. The Ni Hadi Xa Agreement is a legally binding contract which provides for environmental monitoring and management of the Gahcho Kué Diamond Mine additional to such matters governed by legislation. The purpose of the Agreement is to ensure that Gahcho Kue Diamond Mine operations do not compromise the ability of the land to support those who rely on it. Ni Hadi Xa aims to measure this through a combination of on-site environmental monitoring, desk-top technical reviews and traditional knowledge monitoring.

The objectives of Ni Hadi Xa are as follows:

The Ni Hadi Xa Agreement was signed in December 2014, and amended in January 2019. It is administered by a Governance Committee comprised of seven (7) land and environmental specialists appointed by each Party to the Agreement: six (6) indigenous party members, and, one (1) member representing De Beers Canada. The Agreement will remain in effect until one (1) year after the active closure of the Gahcho Kue Mine.

Ni Hadi Xa’s genesis starts with discussions that occurred during the leadup to the Environmental Assessment hearing for the Gahcho Kue Mine. In late 2012, staff from De Beers, Lutsél K’e Dene First Nation, the Yellowknives Dene First Nation, and the Akaitcho Interim Measures Office office met in Lutsél K’e to open a discussion on a collaborative approach to providing monitoring support to the impacted communities. The respective community representatives knew their limitations and a new mine would add to their work without providing any assistance to aide in the participation and review of the environmental monitoring for the site. With the other mines, there was third party assistance available through the environmental agreements. Similarly, the company recognized the limitation and wished to ensure that the communities only had the opportunity to participate in environmental venues, but also had support to ensure that the opportunity could be seized in a meaningful way.

Within this meeting there was common ground and general principles were refined and a framework was agreed to – with all parties advocating for a measure requiring the creation of a body. This was a significant change in the approach that mining companies had traditionally employed. Despite the unanimous appeal for the measure, the Review Panel’s July 2014 Report of Environmental Impact Review did not support the parties’ request. Nonetheless, the good faith displayed carried through until after the hearing.

Negotiations began in September 2014, when the Parties (including the Métis of the North Slave Métis Alliance and the Northwest Territory Métis Nation) worked together to select a common negotiations team, including a joint counsel. Though each party would ultimately bring in their own legal counsel for the final review, during negotiations the team was responsible for drafting the agreement in a way that would respect the party’s interests both as a collective, but also as individuals.

Over the next 8 months, the negotiations teams worked to craft an agreement that was unique to the Gahcho Kué situation and met the parties respective interests. The negotiations teams completed their work in April 2014 and the draft agreement was returned to the parties for ratification. Over the next few weeks, each party considered the agreement and six parties (Deninu Kue First Nation, Lutsel K’e Dene First Nation, North Slave Métis Alliance, Northwest Territory Métis Nation, Tłı̨chǫ Government, and De Beers Canada) signed on to the environmental agreement, now known as Ni Hadi Xa Agreement. 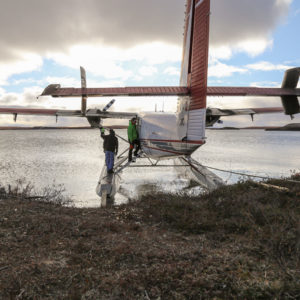 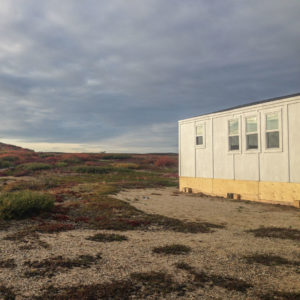 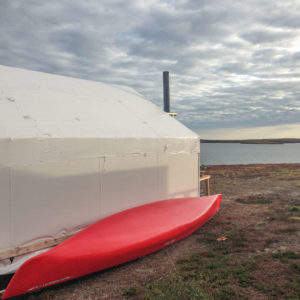 The Ni Hadi Xa Monitoring Cabin is located near the Gahcho Kue Mine Site on the shores of near-by Fletcher Lake. Our cabin is the base for our Traditional Knowledge Monitors when they are carrying out their on-the-land monitoring activities. During the winter months our monitors travel within the area by snow machine and in the summer months, after break-up and before freeze-up, our monitors use the waterways for monitoring activities.

The cabin is fully equipped with communal sleeping areas and an open concept living and kitchen space overlooking Fletcher Lake. The cabin has a stove for heating and electricity is available at times when the generator is running. There are also two standard canvas wall tents on site for additional lodging and storage. The cabin is equipped with first aid and emergency stocks. Safety messaging and protocols are posted in the cabin along with communication guidelines. Communication means are available on-site when NHX staff and program participants are at the cabin.

Scroll back to top